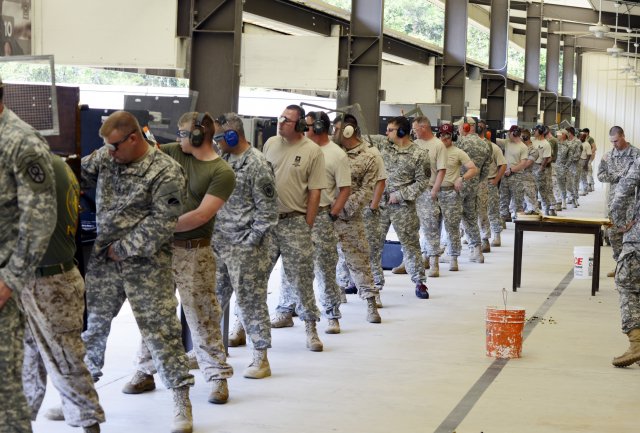 "One of the reasons why we've been so successful is our ability to have the discipline to train wisely," said Franks. "We really take advantage of the experience that other people have on the team to learn from. Sometimes our military coach sees things that we don't see ourselves, or the other shooters give us insight that help us to be better."

The individual match came down to the final day, with Franks edging out Marine Corps Staff Sgt. Jonathan Shue by one point and USAMU teammate Sgt. 1st Class Michael Gasser by three points.

"I knew it was going to be a tight match and it definitely came down to the wire," Franks said. "One of the best things about being in this unit is the high level of competitions that we shoot in. We are able to take the stress that goes with this kind of competition and use it as a positive."

Besides having the support of the USAMU, Franks also shot alongside his brother Spc. Ryan Franks, a Soldier assigned to the 82nd Airborne Division, who competed in his first Interservice championship. Patrick Franks said having his brother around was not only good exposure for his brother to such a highly-competitive environment, but it made him better prepared for the match.

"I was really focused on training him the last two weeks and in turn that helped me become a better shooter as well," Patrick Franks said.

Besides the Army and Army Reserve shooters, competitors from the Marine Corps, the Air Force, the Navy, and the National Guard participated in the annual competition. Competitors shot matches with .22-caliber, .45-cal., center fire and service pistols, ensuring proficiency in a broad array of pistols and enabling the competition to crown the best of the best.

"What I love most about this event is I get to draw from the talent and resources of our entire military," said Lt. Col. Don King Jr., USAMU commander. "While they are out there shooting, competing and having fun, I am pulling in everything and seeing how I can use it to support the warfighter. Everything they do is critical and essential to my mission."

The USAMU Blue team led the team match from start to finish for its ninth consecutive championship. Along with Franks, team members consisted of Gasser, Sgt. Greg Markowski, and Staff Sgt. Jeffery Lewis. They were coached by Staff Sgt. Adam Sokolowski.

"It definitely makes me proud," Sokolowski said. "We train very hard and put a lot of time and effort into it. I know what all of these guys are capable of shooting and it's great to see them accomplish what they try to do."

Besides winning the overall title, Franks also claimed the .22-cal championship and was high shooter in the 2700. Shue won the center fire, service pistol, and Director's matches, while Gasser won the .45-cal match. Sgt. 1st Class Lawrence Carter won the Excellence-in-Competition match. USAMU Blue swept all of the team matches to go along with their overall championship. South Carolina Army National Guard won the high post or station team championship.